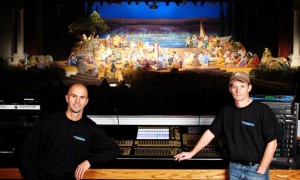 An unexpected audio console crash led the Tri-City Baptist Church in Conover, NC to a new DiGiCo SD8, and an audio overhaul, to boot. Mike Wilson of JerichoAV, a professional audio and video services outfit in Maiden, NC, not only handled the installation, but also overhauled the sound system from rewiring to retuning of the room, and, were able to do it with only a few weeks downtime for the church.

“Knowing I had the personnel to do a console upgrade, I quickly began looking into what was on the market,” he added, “keeping in mind that we not only held weekly services, but were also coming up on our annual large-scale Christmas production. I knew what I needed was going to be one of just a few consoles out there—within TCBC’s price range, of course. Knowing their timeframe was ‘yesterday,’ I was able to narrow our search down to three consoles: a Yamaha M7, a DiGiCo SD9 and a DiGiCo SD8. In the end, they loved the sound of both consoles but wanted the added features of the SD8.

“We were completely impressed with the console’s clean sound and quality, functionality, flexibility, layout and the awesome demo that Mike Wilson gave us,” offered Darrell Fox, TCBC’s Media Director. “Having the ability, thanks to the generosity of Mike Wilson doing the proper job required, to do an audio revamp from our old, outdated system that we were not happy with, to this great new console was amazing. Not to mention, Mike Wilson and his team really impressed us with his knowledge and expertise.”

Once the console choice had been made, JerichoAV started the process of rewiring the stage and amp room, and removing extraneous gear. Not only did Wilson’s console recommendation fix the church’s FOH issue, but it also took care of other areas, including the elimination of a whole rack of ISO splitters, another digital console, 24-track hard drive, processors, preamps and other MIDI devices.

JerichoAV was able to complete the overhaul 2 weeks prior to the estimated time.  Additionally, once the SD8 was in place, Wilson personally set up the console and assisted in getting the programming complete for the Christmas production. “Since run-throughs usually start in late October/early November, we had a whole new beast to learn and get integrated into TCBC’s system,” Wilson recalled. “The SD8 integrated very well with their EV XLC series line arrays, and Shure microphones. The sound was noticeably clean with no external processing. It was so clean that numerous individuals noticed and commented thinking we did a whole system overhaul when all we did was replace an audio console!”

Fox says his favorite SD8 features are numerous. “Having cleaner sound without other processors and fewer pieces of gear doing the same thing is incredible. I love the fader bank layouts, input/output patching, and channel flexibility on the SD8, too. The output patching has been particularly beneficial for handling snapshots and sessions. Also the aux send encoders have the flexibility to be assigned to be any channel parameter. The ability to record up to 56 channels on a computer expanded our current setup of a 24-track hard drive, but also eliminated the extra console, too. And, looking ahead, the simplicity of being able to add another DiGiCo console later for recording or a monitor mix position is made really simple…basically, just plug and play.”

The console has been invaluable in preparing for TCBC’s annual Christmas production, “The Promise”. A crucial crucifixion scene comes to life with the console’s 12 audio tracks of thunder, lightning, wind and rain. “The Temptation scene with Satan’s voice was made even more powerful with the onboard effects we used on the SD8. It made Satan sound like the real demon that he is!”

I think the most important comment that I would like to make about the audio overhaul is that it hasn’t gone unnoticed by the church’s congregation.  After the install the audio crew got a standing ovation and applause in the middle of the first service. “We’ve also heard numerous comments from church members who’ve noticed how ‘clean’ and livelier it sounded,” said Fox. “Some even commented that ‘the voices seem clearer, have you changed microphones?’ People have noticed that there’s something different… in a good way. And that’s a great thing for this church.”